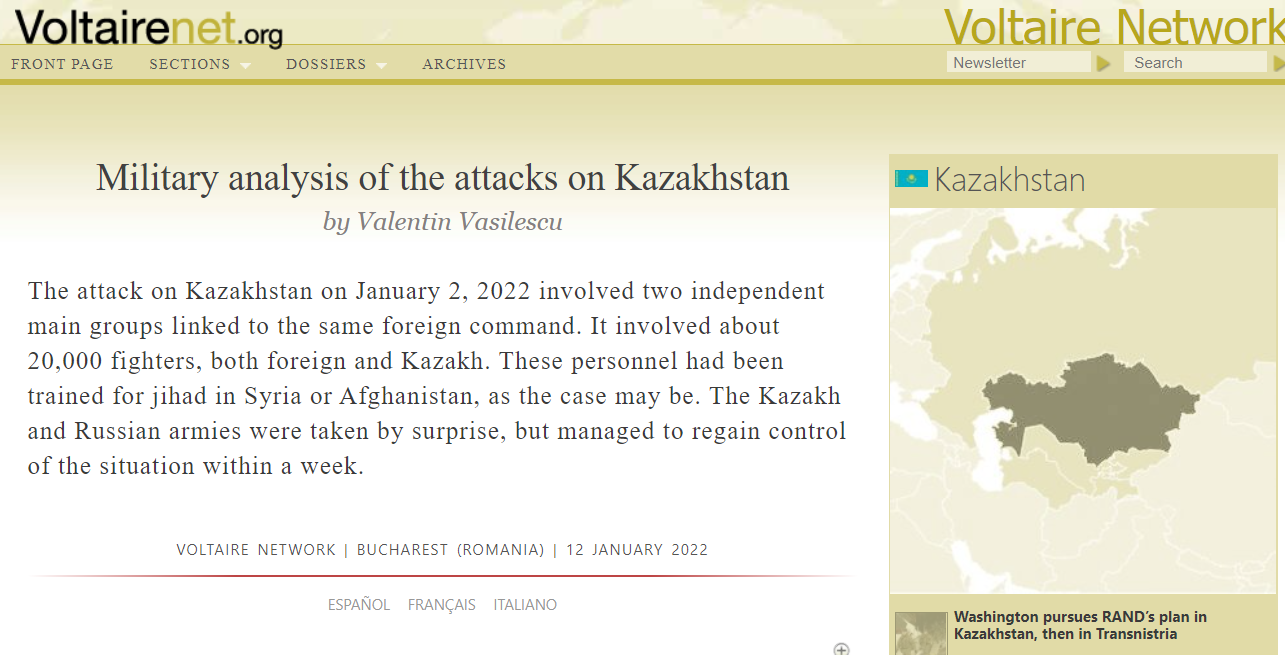 The attack on Kazakhstan starting January 2, 2022 – mirrored the US engineered Ukraine Maidan Coup – and involved two independent main groups linked to the same foreign command. It involved about 20,000 fighters, both foreign and Kazakh. These personnel had been trained for jihad in Syria or Afghanistan.

Military analysis of the attacks on Kazakhstan

The attack on Kazakhstan on January 2, 2022 involved two independent main groups linked to the same foreign command. It involved about 20,000 fighters, both foreign and Kazakh. These personnel had been trained for jihad in Syria or Afghanistan, as the case may be. The Kazakh and Russian armies were taken by surprise, but managed to regain control of the situation within a week. VOLTAIRE NETWORK | BUCHAREST (ROMANIA) | 12 JANUARY 2022ESPAÑOLFRANÇAISITALIANO

The first step to solving the problem was to understand what kind of forces the Kazakhstan authorities had to face.

Dauren Abaev, deputy head of Kazakhstan’s presidential administration, said that the protests in the country had started peacefully and that everything had suddenly come under the control of the provocateurs. The use of secret communications by the demonstrators was essential in the simultaneous coordination of violent actions aimed at pre-established targets. That is, the use of receiving stations managed by state-of-the-art servers located outside Kazakhstan. Communications that the secret services and the national army were unable to intercept. A single command centre coordinated the preparation and direction of the entire terrorist action. Kazakh President Kassym Jomart Tokayev acknowledged this in a speech to the nation on January 7 [1]. He said that “law enforcement agencies and the army have not kept their promises”. “It became clear that we lacked special forces, special equipment and special means.

The militants had PsyOps (psychological warfare operations) specialists in their ranks, capable of manipulating people’s attitudes. They gave priority to transmitting live disinformation already prepared from television studios. Fortunately for the authorities, the terrorists who occupied the Mir TV station building were unable to control the Koktobe TV tower in Almaty, where the broadcasting antenna is located. In conclusion, the failure to seize the media in Almaty played a huge role in the failure of the coup.

A large group (Alpha) consisting of several sub-groups acted simultaneously in Almaty and in cities in southern and western Kazakhstan, with the aim of terrorising the civilian population, dispersing them and preventing the intervention of law enforcement agencies. The Alpha group’s mission included the occupation and burning of administrative buildings, the looting of shops and banks, the setting up of barricades in all neighbourhoods and an attempt to occupy Almaty airport. Dauren Abaev noted that among the terrorists with a high level of combat readiness and brutal cruelty who shot members of the security forces were snipers.

The tactical objective of the Alpha group was in fact a bloody diversion to cover the second group (Bravo), which carried out targeted attacks on dozens of arms shops, army and police ammunition depots, etc.

President Nazarbayev’s former adviser, Yermukhamet Yertysbayev, believes that the terrorists had accomplices in the country. “The betrayal of a number of officials and law enforcement officers made it impossible to foil the terrorists’ plans. According to him, 40 minutes before the attack on Almaty airport, the order was given to withdraw the security apparatus. Mr Yertysbayev may well be right, especially as Kazakh intelligence services have found no evidence of clandestine preparations for terrorist attacks, even though 20,000 specialised attackers operated in Almaty alone.

Only after 3 to 4 days of chaos was constitutional order restored to some extent in all regions, administrative buildings and strategic infrastructure were liberated and placed under military protection. Borders were closed and 70 roadblocks were set up in the country. Many officials of regional administrations and law enforcement agencies were removed from their posts. However, Kazakh President Kassym Khomart Tokayev said that “the militants have not laid down their arms and continue to commit crimes or prepare for them. It is necessary to stop their actions. The combat operation to rid Almaty of the terrorists is being carried out by the special services of Kazakhstan.

Kazakhstan’s Interior Ministry announced that 3,811 violent participants in the riots were arrested, 26 people who attacked law enforcement with firearms were killed and 26 others were injured. RIA Novosti quoted sources in the Kazakhstan Prosecutor’s Office as saying that “among the terrorists detained in Kazakhstan there are many foreign citizens, paid to commit criminal acts”.

At the request of President Kassym Khomart Tokayev, Russia has sent 3,000 troops to Kazakhstan, Belarus 500, Tajikistan 200 and Armenia 70. More than 70 Il-76 and 5 An-124 aircraft transported the Russian peacekeeping contingent of CSTO forces to Kazakhstan. These are sub-units of the 45th Brigade, the 98th Division and the 31st Special Brigade, all of which belong to the airborne forces.

THE ROLE OF THE RUSSIAN ARMY

The mandate given by the Collective Security Treaty Organisation (CSTO) does not foresee participation in combat operations in Kazakhstan, the tasks of the peacekeeping forces being essentially the protection of vital installations. Sub-units of the 98th Airborne Division control the international airport at Nur-Sultan, the headquarters of the General Staff of the Armed Forces and the Kazmedia television centre building.

Separately, in support of local counter-terrorism units, small Russian units such as PsyOps, psychological warfare and reconnaissance units can also operate. For example, a Russian airborne reconnaissance group uses the RB-341V Lieer-3 system. The drones (unmanned, silent search planes and helicopters) capture and transmit video images 24 hours a day or collect data over a wide range of frequencies – SIGINT (signals intelligence), and even GSM networks. When a suspect network is discovered, only certain transmitters in the network are jammed. This prevents the transmission of orders to terrorists down the chain of command. The jamming zone is focused on targeted targets within a 6 km radius. Russian airborne platforms also serve as radio relays for Kazakh military operating in urban areas, where transmission is protected by buildings. Russian airborne troops also have another ground-based system on an 8×8 vehicle: the RP-377LA Lorandit, which consists of powerful frequency source tracking stations and selective jamming stations, all in the 3 MHz-3 GHz range.

Another Russian group specialises in special reconnaissance, carried out by highly trained military personnel. In our case, Russian military personnel are trained in covert infiltration among terrorists to gather HUMINT. Enabling the anticipation of future actions, detection of networks or means of transmission of hierarchical arrangements, tracking of terrorist leaders and placement of permanent tracking devices.

Like the contingent in Syria, the Kazakh contingent is integrated into the networks of the Russian Ministry of Defence’s centralised MK VTR-016 system, which uses the Auriga-1.2V system. Hundreds of portable mini video stations in the areas of responsibility assigned to the Russian military in Kazakhstan transmit secret information in real time to Moscow via Russian military communication satellites. Thanks to Huawei’s server, the most powerful in the world, these transmissions are difficult to intercept and jam. Auriga-1.2V allows highly experienced officers to optimise the actions of their subordinates in the field from the operations room of the Russian Airborne Staff, without any disruptive factors.

After the occupation of Iraq, US occupation troops had to deal with Sunni insurgent groups that were kidnapping Western citizens. To penetrate these groups, US special operations forces set up a targeted operation, creating their own group of “kidnappers”, in which the “kidnapped” were intelligence officers embedded in US-allied media. You may remember the journalists Marie Jeanne Ion (Prima TV, Romania) and Florence Aubenas (Libération, France). Once this group gained notoriety by broadcasting videos, which were picked up by the Iraqi and international media, they attracted the attention of real insurgent groups who offered to take care of the “abductees”. In this way, the real insurgent groups in Iraq were discovered and arrested.

The Russian army is proving that it has learned from US innovations in the fight against insurgents in Iraq. Russian specialists in psychological operations have come to the conclusion that it is easier to bait terrorist cells than to search for them and neutralise them. So, following the US model, they have set up a fake “Kazakhstan Liberation Front” that posts videos on social media and encourages terrorist cells that participated in the country’s uprising to join.Valentin VasilescuTranslation: Roger Lagassé

Expert militaire. Ancien commandant adjoint de l’aéroport militaire d’Otopeni.Military analysis of the attacks on KazakhstanMilitary intervention can not overthrow the Venezuelan governmentThe Japanese Army is now as strong as it was in the Second World WarWhy is the United States suddenly withdrawing from Syria?Who profits from the incident in the Strait of Kertch? Articles by this author Send a message

Washington pursues RAND’s plan in Kazakhstan, then in TransnistriaTwo personalities arrested in Kazakhstan for high treasonOverview of two days of siege in KazakhstanKazakh Security Council adopts draconian measures against jihadistscontinue

The articles on Voltaire Network may be freely reproduced provided the source is cited, their integrity is respected and they are not used for commercial purposes (license CC BY-NC-ND).