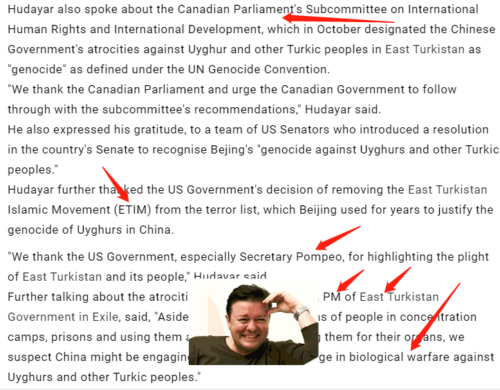 The agitprop continues: Where does this latest round of propaganda, (for that is what it is) come from? An ‘east turkeystan government in exile’ – ‘east twerkystan grovellment reptile?’ Get this, ‘they’ are actually calling this twerp ‘prime minister’..

‘..further thanked the US Government decision removing the ETIM from the ‘Terror list’.. ‘especially (outgoing) Secretary of State Pompeo.

So, the US government are happy to attempt to use the ICC as a weapon against China – this is the same International Criminal Court that previously the US government refused to recognise, and whom the US admin have bullied and threatened,

Bolton, as Trump’s national security advisor, announced that “if the court comes after us, Israel or other US allies, we will not sit quietly […] We will ban [ICC] judges and prosecutors from entering the United States. We will sanction their funds in the US financial system, and we will prosecute them in the US criminal system.”

“Trump targets ICC with sanctions after court opens war crimes investigation” guardian.com/us-news/trump-icc-us-war-crimes-
‘The US administration has launched an economic and legal offensive on the International Criminal Court in response to the court’s decision to open an investigation into war crimes in Afghanistan carried out by all sides, including the US.
The US will not just sanction ICC officials involved in the investigation of alleged war crimes by the US and its allies, it will also impose visa restrictions on the families of those officials.“

Here’s an article outlining the preposterous claims being made:

Note how the Grauniad ‘Spins’ this: “The latest complaint makes clear that ‘the alleged’ crimes committed… The lawyers claim the torture has taken place on a mass scale”

The expected ICC decision, already relayed to lawyers:
‘There is insufficient evidence’

This peurile pile of drivel won’t make it past the receptionist..

Peoples of Europe brought to their knees by the Straussians

Reproduced with thanks from Voltaire NetworkEU brought to its knees by the Straussiansby Thierry MeyssanA US grouping, constituted around the thought of the philosopher Leo...

“The love of money, is, the root of all evil.. as the saying goes. Greed.”
So.. 2023, and they’ are still at it.. relentlessly.. from Ukraine to Chinese tennis players to Xinjiang to the Beijing Olympics.. gawd it’s getting boring eh? https://www.youtube.com/watch?v=McJWl__HcOI
So.. Yes, quite.. It’s just the great game isn’t it? The ‘WASPS’ desperate scramble to retain power.. futile as it is.. they know no other way – attack, destroy, dominate, control, loot, pillage.. – which is why their time is done.
The latest example of the fading kleptocratic US empire’s desperate attempts to Klingon to power: Ukraine. here’s the backstory – Essential viewing: Ukraine On Fire;
https://www.youtube.com/watch?v=McJWl__HcOI
Consider: The western system of US ‘democracy’, ‘rules-based-order, especially in relation to the rest of the planet, it is, of course, essentially parasitic – in contrast, the system extant in China, in relation to the rest of the world is essentially symbiotic
— Barrie VVeiss 白矛

They instigate and justify perpetual war via the msm mainscream mania, and thereby, through ‘manufactured consent’, thus enslaving and leeching your social and economic potentials.