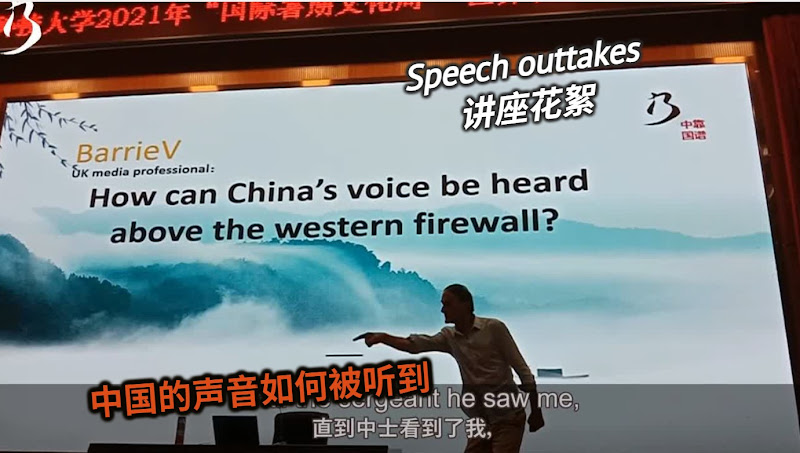 Updates from Barrie and Best China Info – Now at https://www.youtube.com/c/BestChinaInfo/community

Twitter Suspended @ChinaBazzar account after Barrie criticised UK US Canada admins latest ‘declarations’ and allegation of ‘Genocide’ against China – Specifically when Barrie highlighted the insult to the Shoah that the UK Australia Canada US are making by abusing and misusing the term ‘Genocide’. Guess the Zzionist lobby weren’t too happy about that huh?
See:

Updates from Barrie and Best China Info – Now at https://www.youtube.com/c/BestChinaInfo/community

The utter absurdity of US political propaganda:
“Solar Panels ‘Made In China‘ are bad, but Japanese nuclear sewage is good – Beneath contempt, slithering beneath the gutter slime..”

Reproduced by Observer NetworkToday from an interview with DotDotNews HK

Opinion | How I (too) was fooled by western propaganda

‘Tainted Cotton’ becomes ‘Tainted Solar Panels’: MSM Latest Smear Campaign Against China Xinjiang from Bloomberg – full Chinese translation version – all of the six available videos in one video.. First it was ‘genocide’*, then ‘cultural genocide, then slave labour, then forced labour, coerced labour, then diluted even more to: ‘Tainted Cotton’ which now becomes ‘Tainted Solar Panels? The BBC having been publicly slapped down by Hua ChunYing and Barrie using Adrian Zenz own words run away with their tail between their legs (to Taiwan) ‘drop the baton’ and Bloomberg very clumsily pick it up.. and continue the anti China rhetoric now with this laughably flimsy ‘Tainted ‘impure’ PolySilicon.. Like.. Tainted Solar Energy? Mechanised robot factories full of.. umm.. ‘robot machine slaves’.. Really? Whatever next? Tainted kebabs? Beneath contempt. Hilarious. Western msm latest Smear Campaign against China Xinjiang from Bloomberg – See @climate (Twitter) and Bloomberg collaborating with Adrian Zenz and ‘codging’ together a ‘mockumentary’ full of twaddle – FULL CHINESE TRANSLATION VERSION COMING OUT TODAY – splicing all 6 into one video. N.B. * Genocide: Any Person or Government Propagating allegations of #Genocide​ via anti #China​ propaganda using the deceptions of self-confessed antisemitic #Nazi​-affiliated #AdrianZenz​ is profaning the #Shoah​ – This is a profanity, an obscenity – spitting on the graves of holocaust victims #Realitycheck​ #US​ #UK​ – See also my video here: https://www.youtube.com/watch?v=zkrm_…​ The relentless MSM Latest Smear Campaign attempts to use ‘Forced Labour’ slur against China Xinjiang – hit piece from Bloomberg https://youtu.be/IiGcW3k7t9c​ via BestChinaInfo Recommended by https://twitter.com/SpokespersonCHN/s…​ 中英双字幕：揭露涉疆谎言第2集，中国有五个自治区，为什么在新疆搞政治抹黑？How China ISN’T crushing Uyghurs in XinJiang! Exposing BBC anti China agitprop this full video now translated with the completion of this second part with Chinese subtitles 中国没有种族灭绝，重要的视频看三遍！BBC / MSM /西方政府的涉疆谎言 Full video is now completely translated with Chinese subtitles: (Chinese subtitle version here: https://youtu.be/Cso5gsS6bYY​ Part 2 available now here: https://youtu.be/c7Iwms-S_YM​ 中国没有种族灭绝，MSM /西方 政府对新疆持谎言 第2部分，现在用中文字幕翻译: Western government BBC lies on Xinjiang Chinese subtitles ) UPDATE: We’re working, and researching, in great depth, follow-ups to this video. We’ve found some totally damning and utterly irrefutable material which PROVES beyond any doubt that western governments have concocted this whole sorry story, and the next few videos should put an end to the western MIC agitprop and propaganda on China Xinjiang and Uyghurs for good – stay tuned! The essence of this video is further illustrated on this web page: https://bestchinainfo.com/geopolitics…​ See also, accompanying background and materials at: https://bestchinainfo.com/geopolitics…​ I post regular updates and links on our ‘community’ page: Again, a few more people have asked about the intro / outtro BGM (background music) on some of our videos. here’s one of the songs we use: Copyright Barrie Jones 1993 (Demo) Two Worlds (confusion) Recorded in 1993 – my brother Mel on guitar.. Copyright 1993 PRS Tunecode – 7255174F – ISWC – T-011.463.136-5 – https://soundcloud.com/barrie-v/two-w…​ We wish to give a huge and heartfelt thank you to Angelo Giuliano who gave us a big ‘leg-up’ following which CGTN picked up on a video we’d made, and then Manley Lau in Hong Kong made another video about this video too! Thank you Angelo!! And thank you Manley! Angelo Giuliano can be found at https://twitter.com/Angelo4justice3/s…​ https://www.youtube.com/channel/UC8oK…​ We particularly recommend one of the most detailed and significant genuine ‘on-the-ground’ reports from one of the world’s most highly respected writers, authors and journalists; Andre Vitchek, here: https://bestchinainfo.com/news/andre-…​

In 1968 a NASA team ‘working on the Apollo moon mission’ took the ‘astronauts’ to a Navajo reservation, which landscape closely resembled the Lunar surface.
In amongst the lights and camera equipment there were two large figures that were dressed in bulky white lunar spacesuits.

Nearby a Navajo elder and his son were watching the strange figures walk about being filmed by other people.
The two Navajo people were spotted and approached by the NASA personnel.
Since the elder did not know English, his son asked for him what the strange creatures were and the
NASA people told them that they are just men that are getting ready to go to the moon.
The elder became very excited and asked if he could send a message to the moon with the astronauts.

Sensing a great PR opportunity the NASA people hurriedly got a microphone and tape recorder.
The elder spoke his message as they recorded and NASA then asked his son to translate.
His son smiled but declined, saying, ‘It’s a good message’…