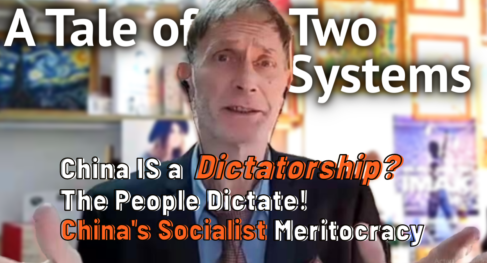 LATEST VIDEOS FROM BEST CHINA INFO – SUMMIT FOR DEMOCRACY?
WHICH VERSION OF DMOCRACY IS WORKING? AND FOR WHOM?

Summit for Democracy, is, actually, the US MIC Herding Sacrificial Cows + pSychophants to SubmitToDemocracy™ – The US Brand(ing Iron) Version;
Part 2 Online Now: https://youtu.be/q_5i4rWbBbo

Happy to see this on BiliBili! https://www.bilibili.com/video/BV1Ya411r7s7 –

Friend and comrade – China’s Ambassador to Cuba, former Minister to China’s Embassy in the UK – Ma Hui – recommended this video on China’s Socialist Democratic Meritocracy – (made originally for CGTN) – One is delighted to have recommendation from such a highly esteemed gentleman and scholar – a high honour indeed – Thank you @MahuiChina – minister to China UK Embassy – now China Ambassador to #Cuba https://twitter.com/ChinaBeehive/status/1468232373389209600

– HERE’S THE FULL TRANSCRIPT OF THE VIDEO

[Music] [Applause] [Music]
okay [Music]
best china info Barrie VVEiss V V E I S S and
uh i’ve been asked (BY CGTN) if I would.. offer
my perspective on on democracy
and specifically i think at this point it’s
kind of significant because China is uh
carrying out uh elections an election
process and now

so so um hopefully along the way i will
be able to dispel
some myths about
the chinese system of
socialism with chinese characteristics a
social democracy with chinese
characteristics and also i hope to be
able to um
destroy the mythology
as i see it of
what western and so-called developed
countries describe as their
version
of democracy itself so um i’m going to
be comparing these two things and this
is my perspective this is my considered
opinion okay this is after
a lot of years of living around the
world in the uk in the us
in australia and now in china and i’ve
seen
many sides of the coin okay
so there are elections in progress
people are voting for deputies to the
people’s congress in china across china
in cities and townships
and villages and principalities
there are these this
process of voting is happening
these people get elected and they get
elected on the basis of
meritocracy now i won’t go into the
great details of this because
it can be a little boring and if i over
intellectualize i’ll lose the message of
what i want to say um eric lee um
very well known uh
venture
socialist capitalist i’m going to call
him he did a great speech a great ted
talk on this uh
2013 maybe
for which he received a standing ovation
and he explains this system far better
than i could and he explains it very
succinctly and and very
um entertainingly um and with a lot of
logic..

my perspective on on the western
version of
democracy now
um
is it for the people and by the people
well the people have the illusion of
choice okay there’s an illusion of
choice uh we can choose this guy or this
guy or maybe some of those guys over
here but but we have a choice so it’s
democratic.. umm..
no!

this is the inbuilt system this is this
is innate in the western systems of
so-called democracy
it’s them or us
so there’s no agreement in this the
whole thing is combative right from the
beginning
and
people vote for this guy or this guy
on the basis of what the media is
pumping out pumping into their brains
it’s based on this it’s not based on
can this guy do the job does he have a
track does he or she have a track record
in being capable of doing this
do i trust him to do this?

well China
doesn’t do it like that China says well
how should we do this and they consult
and things are reviewed and and there
are five-year plans these five-year
plans are measurable
a nation of 1.4 billion people
through a government
for the people and by the people has
eradicated extreme poverty has any
western democratic system achieve this
no have they achieved anything close to
this no have they even promised this no
excuse me have they even promised this
no
now here’s another thing this word
promise

https://en.wikipedia.org/wiki/Project_for_the_New_American_Century
were the people of the uk and the u.s uh
europe various countries consulted uh
australia consulted about uh the invasion..
the illegal invasion of Iraq
or the illegal destruction of Libya no
they weren’t they weren’t consulted at
all this was
capitalist adventurism and it was stated
as a plan the PNAC for america this was
stated and written down and signed by
various people it’s not difficult to
find this document
we’re going to take out seven countries
in five years Iraq was one Libya another
Syria another were the people consulted
was this anything to do with people no
it wasn’t
okay i mean there’s no consultation in
this at all

and they do
they invade countries they they pour
billions of the country’s resources into
weapons and arms and manufacturing
uh manufacturing arms and buying weapons
and selling weapons and invading other
countries
uh capitalist adventurism imperialism if
you want to call it that
uh rob.. the way of the robber baron
scumbag that’s what the system is
so winning is the only game in town

Support us: We’ve been asked how people can support us – –

Hit the Like Subscribe and Bell Buttons! Share with friends! Also support via BuyMeaCoffee, Patreon and WeChat QR and Tip codes – – posted on our community section here!

Thanking everyone for your comments, feedback and support @ https://www.youtube.com/c/BestChinaInfo/community

Hope you enjoy! Just one more Summer of Love.. It occurred to me that the ever decreasing circle of the last two millennia of human history has spun us around to a similar point in time to that of forty or so years ago. ..contrary to what one might think, ‘Summer of Love’ isn’t about any girl in particular, moreover.. It’s a song to the Mother.. the Earth.. from whose Love we came.. and whose Love we should return.. There is only Joy in giving, that is,. Loving.. Giving Love! Summer was recorded and mixed on a coal-fired 1998 600 mhz pc with 128mb ram (yes, really.. 128mb ram – You could see the steam blasting out the sides during the latter stages.. mind you.. it was a coal fired pooter.. 🙂 I used an old copy of the great Cooledit, a Yamaha SY85 keyboard, a cheap condenser, an acoustic guitar, persistence… and a fair old dollop of Love Music is an echo of the word the Eternal and infinite Beginning the breath of the great spirit send the vibration back …with Love 🙂 (just one more) Summer of Love is © 2001 / 2005 / 2013 Barrie V (Barrie Jones) and registered with the Performing Rights Society of the United Kingdom just one more Summer of Love by Barrie V (copyright Barrie VVeiss) PRS registered： EJNW-170205-0050 PRS Tunecode 4464258N ISWC T-011.189.497-3 Other References : EJNW 140911-0899-00 SIWID 30861107168 Performing Rights Society work reference A00S4T100 WIDB Number 0003096373 (just one more) Summer of Love by Barrie V (Barrie Jones)

Peoples of Europe brought to their knees by the Straussians

Reproduced with thanks from Voltaire NetworkEU brought to its knees by the Straussiansby Thierry MeyssanA US grouping, constituted around the thought of the philosopher Leo...

“The love of money, is, the root of all evil.. as the saying goes. Greed.”
So.. 2023, and they’ are still at it.. relentlessly.. from Ukraine to Chinese tennis players to Xinjiang to the Beijing Olympics.. gawd it’s getting boring eh? https://www.youtube.com/watch?v=McJWl__HcOI
So.. Yes, quite.. It’s just the great game isn’t it? The ‘WASPS’ desperate scramble to retain power.. futile as it is.. they know no other way – attack, destroy, dominate, control, loot, pillage.. – which is why their time is done.
The latest example of the fading kleptocratic US empire’s desperate attempts to Klingon to power: Ukraine. here’s the backstory – Essential viewing: Ukraine On Fire;
https://www.youtube.com/watch?v=McJWl__HcOI
Consider: The western system of US ‘democracy’, ‘rules-based-order, especially in relation to the rest of the planet, it is, of course, essentially parasitic – in contrast, the system extant in China, in relation to the rest of the world is essentially symbiotic
— Barrie VVeiss 白矛

They instigate and justify perpetual war via the msm mainscream mania, and thereby, through ‘manufactured consent’, thus enslaving and leeching your social and economic potentials.