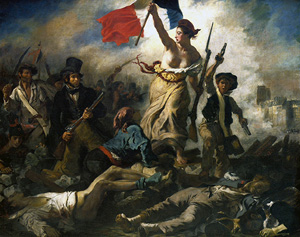 Is the chaos and storming of the US capitol building a symptom of the collapse of America? Yes. Is it a revolution? No.

Whenever I see an ‘event’ like this I immediately think ‘smoke and mirrors’. ‘SPIN’. Such is the level of propaganda and spin that is so well practiced in the west. So – another false flag operation? Another 9-11 / Gulf of Tonkin moment? Liberty leading the people.. astray?
..up the garden path? 😉

See: ‘Behind the scenes of the US Congress riots: What’s left of free speech in the West after Trump’s silencing – the beginning of America’s decline’ : 美国国会暴乱的幕后，正片解析：从特朗普被禁言看西方的言论自由还剩什么——美国衰落的开始

US ‘Bastille day’? Nah. More like the US version of the Reichstag fire: I was reminded of the painting by delacroix: La Liberté guidant le peuple – ‘Liberty leading the people’: Delacroix – When the ‘Storming’ of US capitol building happened – I was immediately suspicious of this and posted about it 06-01-2021 : https://bestchinainfo.com/news/liberty-leading-the-people/

Is this a smokescreen to distract the masses via the media while something far more serious is going on in the background? Highly likely. Why?

My thoughts are these: I just saw several videos of US Capitol Police opening the gates to the capitol buildings, allowing the ‘protesters’ through. A large angry crowd, allegedly incited by the outgoing president Trump. Now, the truth is, if the security forces didn’t want people to get into the building, they wouldn’t have been able to get in. Period!

The gates were opened. So it would seem that there are ‘agents’ ‘agencies’, that allowed this chaos to occur. Why? So the MIC owned MSM could ‘spin the narrative’ and propagandise this alleged chaos to achieve a particular outcome. I am pretty sure this is a ‘Psy Op’ – a psychological operation – propaganda. Unfortunately someone has been shot and killed.

Further thoughts: The comparison between the occupation of the Legislature building in Hong Kong are obvious. The US and UK ‘praised’ the action of insurrectionists in Hong Kong – Well how does it feel now, now the ‘chickens have come home to roost’ – karma would seem to have brought it back to America. But again –  there’s probably more to this than meets the eye.

I only saw ‘ready-for-news-cameras’ sensationalism and smokescreen and so I decided to peer through it.. At once I sensed Propaganda, Spin.
A ‘9-11’ moment. Such is the level of propaganda and spin so well practiced in the west. Then I found this piece of video. at; bilibili.com/video/BV1ZK411M7kv : ‘Behind the smokescreen of the U.S. Capitol riots, analyses footage from foreign media’ (English accent but with subtitles in Chinese and English)

And became more certain that another ‘false flag’ ‘psy- op’ Gulf of Tonkin moment was happening – quite possibly a natural phenomenon that was manipulated into being ‘something else’. Highly likely..

It seems to me that an ‘event’ that was happening anyway, a reasonably peaceful protest, demonstration, was infiltrated, and there was an element of riotousness, during which, unfortunately someone was shot and killed (by a member of congress), apparently, a woman who was an ex-airforce personnel.At the time the alleged riot and ‘takeover of the Capitol Building happened, there was a vote being taken:

‘VP Mike Pence was chairing a joint-session which intended to allow full speeches from those opposing the election and maintaining there had been fraud. The violence brought this session to an end prematurely, totally undermined Trump’s legal and procedural challenges and killed any chance he had of overturning the electrical college vote. No sooner was the “attack” over, than many of the Republicans in both houses who were planning to oppose Biden’s election backed-down.

— Kit Knightly, from: “The Storming of the Capitol”: America’s Reichstag Fire?
The four big lies underpinning this story show it was likely a staged event.”

Now, one has to ask the question: Who stood to benefit from this ‘riot’, this ‘takeover of the capitol building? Certainly NOT Donald Trump. Trump and his supporters have been accused of trying to stage a coup. Actually, the opposite is closer to the truth.

To quote again from Off-Guardian.org:

“The media are already spinning a narrative around the events in Washington DC. One that bears no resemblance to reality, does not hold up to any kind of scrutiny and will have massive, far-reaching consequences for all of us.”

They’re calling it “one of the darkest days in our nations history”, a day that will “live in infamy”. It will likely be memed into a shorthand date – 1/6/21, like 9/11 and 7/7. It will be the day “American democracy was attacked and prevailed”, the day the nation nearly fell to “fascists”.

Not one single part of this story is true

One should always be wary of any event which “accidentally” achieves the exact opposite of its stated or apparent intent.

In the title, I refer to this as America’s Reichstag fire, and that’s not just emotive language, the parallels are pretty clear: A staged attack on a political building, deliberately misattributed to political enemies and used to consolidate the power of a freshly installed leader.

Freedoms have already been severely undermined in the US by the Patriot Act and its successors, those few rights left to American citizens will definitely be under threat once Trump is finally removed and Biden (or Harris) is put in his place.

Although there is not yet any talk of legislation, it’s certainly true there are whispers of purges and other measures to “protect the constitution”.
End Quote

Nutshelling US American ‘Democracy’ – the American democratic system: The fingerpuppet, Trump (or Biden, Obama, whomever) is never anything more than an attraction, a circus clown, ‘useful idiot’ whose purpose is to ‘win votes’, and give the public the illusion of them having a choice: ‘democracy’, which choice of course, is only a veneer to cover ‘which side of ‘the money’ is robbing the wealth generated by the masses of the west to channel it upward to the 1%. Trump ‘won it’ for ‘Republicrats’ (Republican) the first time round, and then, having outlived his ‘usefulness – was totally ‘expendable’, unceremoniously dumped, and silenced, disappeared. And following the capitol building smoke and mirrors theatrics, the deMocrICan (Democrat) side of the coin were declared ‘winners’. And make no mistake dahlinks, theater it was, it’s all ‘theatre’.

See: Behind the scenes of the US Capitol Building Smoke and Mirrors: What’s left of Free Speech in the West? America’s continuing decline’ : 美国国会暴乱的幕后，正片解析：从特朗普被禁言看西方的言论自由还剩什么——美国衰落的开始 bilibili.com/video/BV1X64y1Z7tn

2 thoughts on “Liberty leading the people – Up the garden path? Bastille Day style revolution in the US? nah..”