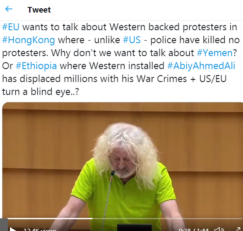 EU wants to talk about Western backed protesters in Hong Kong where – unlike US – police have killed no protesters. Why don’t we want to talk about Yemen? Or Ethiopia where Western installed Abiy Ahmed Ali has displaced millions with his War Crimes: US UK EU turn a blind eye..

A fearless voice speaking truth to hypocrisy – Holds the mirror up to the ‘suits’ in EU UK US France Germany and co, and their ridiculous agitprop against China while they make billions from weapons that Saudi Arabia use to destroy Yemen. Salute you comrade Wallace! (jesus they must shit their pants whenever you walk in!)

Mick Wallace
@wallacemick
·
Dec 19, 2020
EU gives prizes to opposition in #Belarus because it borders #Russia – we love #HumanRights when we can kick #China + #Iran – but can’t get debate in Parliament on #Yemen because we’re complicit in #Saudi #UAE Genocide that’s killed hundreds of thousands, and millions starving… https://pic.twitter.com/Ow2xYBMiO2
Replying to @wallacemick

RT @wallacemick: #EU – Latin America gig talked about reducing inequality + overcoming #COVID19. During a pandemic one would expect all countries would work to mitigate the spread of the virus + it’s impact on human Society. So why are #EU killing people with Sanctions #Venezuela #Iran #Cuba …? t.co/41mSn2KAOZ

China a view from an Egyptian Observer

China is the worst fear of our planet’s white western supremacists the ‘western masters’. They want you to despise and dread a country that’s done nothing to you, that hasn’t invaded anyone, bombed or sanctioned anyone, that hasn’t overthrown any foreign government, or used its military on anything since 1979. You’ll hate China and pray for its collapse, so that the West can continue to do what it’s done since the age of Hernán Cortés and Francisco Pizarro — rape and pillage the earth from Latin America to Southeast Asia, and disguise its blood-spattered imperialism in the soft power and propaganda of “Western civilization” and world leadership.

US MPIC path to War against China

It was gripping, stunning testimony. Before congress, a 15 year old volunteer nurse, Nayirah, struggled to compose her trembling voice, barely holding back tears, as she testified that marauding soldiers had thrown babies out of incubators in a hospital, leaving them to die on the floor.
Later, Amnesty International confirmed authoritatively that 312 babies had been killed this way[1]. All the news agencies ran with the story, and the country and congress were in a total uproar.

There was only problem: it was completely, utterly, totally fraudulent. It was engineered, perjured, coached testimony concocted by PR experts, designed to manufacture consent for a US war on Iraq.

“You are paid by China to create these videos”
Barrie: No, I am not. Neither China nor the Chinese government pay me to do what I do. The truth is, if they offered I would accept!!
But neither you, not the BBC, nor anyone else on this planet has one single shred of evidence to prove otherwise.
Barrie VVeiss
p.s. I wouldn’t care a jot if you did. Translation: I wouldn’t give a fcuk if you did.

The utter absurdity of US political propaganda: “Solar Panels Made In China are bad, but Japanese
nuclear sewage is good – Beneath contempt..” This Web page and embedded video Contains Detailed Analysis of EXACTLY how Bloomberg, BBC et al SPIN the ‘opinion’, and ‘interpretation’ of people like Adrian Zenz to concoct ‘allegations of gee-no-cide and forced labour: